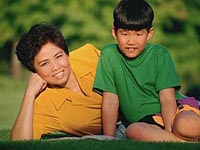 When a woman permanently stops having menstrual periods, she has reached the stage of life called menopause. Often called the change of life, this stage signals the end of a woman's ability to have children. Many healthcare providers actually use the term menopause to refer to the period of time when a woman's hormone levels start to change. Menopause is said to be complete when menstrual periods have ceased for one continuous year.

The transition phase before menopause is often referred to as perimenopause. During this transition time before menopause, the supply of mature eggs in a woman's ovaries diminishes and ovulation becomes irregular. At the same time, the production of estrogen and progesterone decreases. It is the big drop in estrogen levels that causes most of the symptoms of menopause.

When does menopause occur?

Although the average age of menopause is 51, menopause is considered normal between 40 and 60 years old. Women who smoke and are underweight tend to have an earlier menopause, while women who are overweight often have a later menopause. Generally, a woman tends to have menopause at about the same age as her mother did.

Menopause can also happen for reasons other than natural reasons. These include:

What are the symptoms of menopause?

What can I do about hot flashes?

The North American Menopause Society (NAMS) published a guideline for menopause hormone therapy in 2017, which states that for most women who are within 10 years of their last menstrual period or less than 60 years old, hormone therapy is safe and effective option for treatment of hot flashes, prevention of osteoporosis, or vaginal dryness also known as the genitourinary syndrome of menopause. There are also non-hormonal options including prescriptions, cognitive behavioral therapy, or acupuncture.

Several therapies that help to manage menopause symptoms including:

When approaching menopause, every woman should discuss each option — the potential risks and benefits — with her healthcare provider.