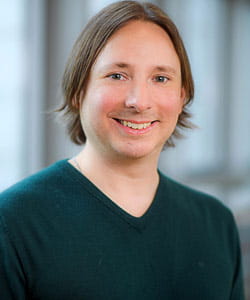 Jason Meyers, Program Coordinator, is a 23 year veteran of the Cleveland, Ohio music scene. When not working at University Hospitals, Jason spends his nights performing at venues across the region. He has shared the stage with acts such as Leon Russell, Bret Michaels, Welshly Arms, Will Hoge, The Gaslight Anthem, Saving Jane, Marcy Playground, Seven Mary Three, and many others. Jason curates the weekly Healing Harmony Friday Concert Series in the UH main campus atrium. This program highlights the talent of the local music scene while bringing the gift of music to patients, families, visitors, and staff.

Jason has played throughout the United States including the Rock and Roll Hall of Fame, The House of Blues, and the Huntington Cleveland Convention Center. He can also be heard spinning the bands and musicians from Northeast Ohio every Monday and Saturday night as host of NEORocks on WJCU 88.7 FM.

As an active member of the Cleveland music scene, Jason works as a Music Liaison for the Brite Winter Festival as well as the Heights Music Hop Festival. He works with the local non-profit, Roots of American Music, as a teaching artist in schools as well as senior care and assisted living facilities throughout the greater Cleveland area. You can catch him at the CLE Urban Winery as host of CLE Uncorked, a pre-arranged performance event for poets and musicians, as well as Brent Kirby’s fill-in host at the 10x3 at Brother’s Lounge.

Request an appointment with an Integrative Medicine specialist at University Hospitals.
Call: 216-285-4070