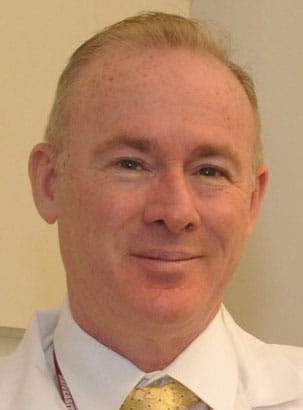 Dr. Driscoll is currently the Assistant Director of the Hematologic Malignancies Translational Program at University Hospitals Cleveland Medical Center. He is a member of the Division of Hematology & Oncology at UH as well as the Case Western Reserve University School of Medicine and Seidman Cancer Center. He received Bachelor's and Doctoral degrees from the State University of New York at Buffalo. He then completed an Internal Medicine Residency at Boston University Medical Center followed by a fellowship in Hematology & Oncology at the National Cancer Institute. Following fellowship, he joined the University of Cincinnati College of Medicine in 2012 and was then recruited to UH and CWRU in the fall of 2019. Dr. Driscoll's early research work focused on the Isolation and characterization of the ATP-dependent proteasome and led to the discovery that the proteasome functions as the catalytic core of the Ubiquitin+Proteasome protein degradation pathway. He then was the first to describe and characterize the immunoproteasome, a highly specialized variant of the proteasome, which is induced in immune cells by cytokines. A well-described function of immunoproteasomes is to generate peptides with a hydrophobic C-terminus that can be processed to fit in the groove of MHC class I molecules. This display of proteasome-generated peptides on the cell surface as MHC Class I antigens allows for surveillance by CD8+ T cells of the adaptive immune system for virus or pathogen-infected cells. These studies have been translated from the bench-to-bedside with the clinical success of proteasome inhibitors to treat the plasma cell malignancy multiple myeloma (MM) which have doubled survival for certain patients. Currently, Dr. Driscoll's laboratory is using biochemical and genomic approaches to decipher mechanisms of drug resistance to proteasome inhibitors in MM patients. Finally, he and his colleagues are studying why the incidence of MM is greater in African Americans than Caucasian Americans and why African Americans are diagnosed with MM at a younger age.