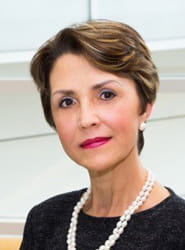 Dr. Pikuleva is the Carl F. Asseff Professor of Ophthalmology. She has an R01 from the NEI and an R01 from the NIGMS as well as a clinical trial grant from the Alzheimer’s Drug Discovery Foundation. Previously, Dr. Pikuleva was a recipient of the Stein Professorship from RPB. The two major areas of research in her laboratory are studies of cholesterol maintenance in the retina and brain. The ultimate goal of these studies is to delineate the importance of cholesterol-related pathways for retinal and brain functions and whether pharmacologic modulation of these pathways could lead to disease-modifying treatments for retinal and brain disorders. Dr. Pikuleva is the PI on the NEI P30 grant.

Dr. Pikuleva focuses on cholesterol metabolism and cytochrome P450 enzymes (CYPs or P450s 27A1 and 46A1) whose role is to generate more polar forms of cholesterol for cellular elimination or regulation. The two major areas of research in the laboratory are: 1) the link between cholesterol and diseases of the retina; and 2) effects of pharmacologic enhancement of cholesterol turnover in the brain. The ultimate goal of these studies is to identify new therapeutic targets and treatments for diseases of the eye (age-related macular degeneration and diabetic retinopathy) and the brain (Alzheimer’s disease).

Generation and characterization of Cyp27a1-/-Cyp46a1-/- mice with significantly impaired cholesterol metabolism as well as in vitro and in vivo evaluations of CYP46A1 as a drug target have led to two major findings in Dr. Pikuleva’s laboratory. First, disturbances in cholesterol metabolism in the retina are associated with different types of retinal vascular abnormalities. Second, it is possible to enhance cholesterol turnover in the brain pharmacologically, at least in mice, by FDA-approved medications that are used for indications unrelated to cholesterol. The laboratory is currently further investigating these fascinating findings.

To accomplish the challenging goal of developing new therapeutic approaches, many in vitro and in vivo methodologies are used in Dr. Pikuleva’s laboratory. The utilized in vitro techniques include, but are not limited to, histology and histochemistry, biochemical/biophysical (X-ray crystallography) studies of the purified enzymes, gene profiling, and cutting edge mass spectrometry quantifications of tissue sterol and protein levels. The in vivo work involves generation and ophthalmic characterization of mice with genetic deficiencies in cholesterol metabolism, pharmacologic treatments of these and wild type animals, as well as retinal evaluations by state-of-the-art ultra-high resolution spectral domain optical coherence tomography and fluorescein angiography. Projects are available for medical and graduate students as well as MDs interested in research. 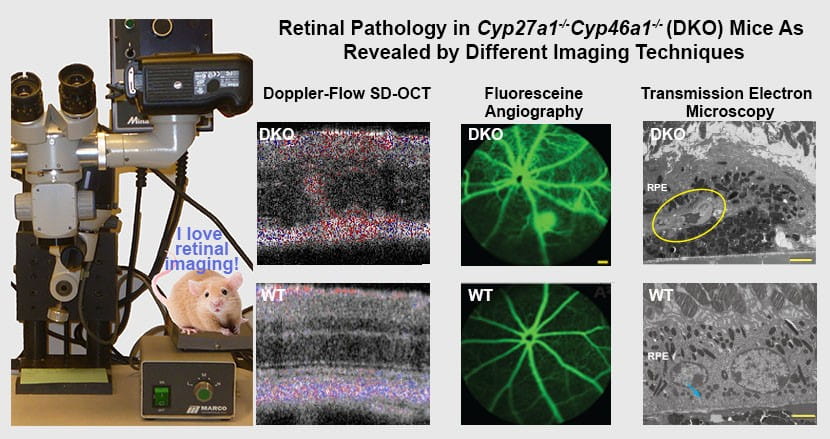 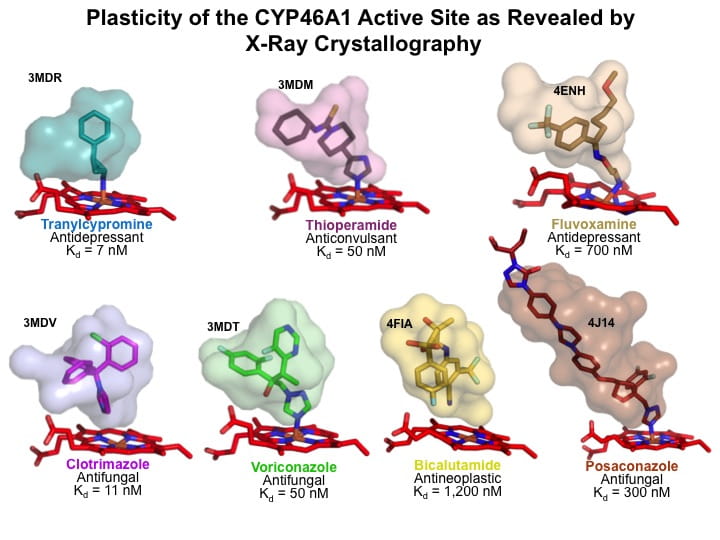 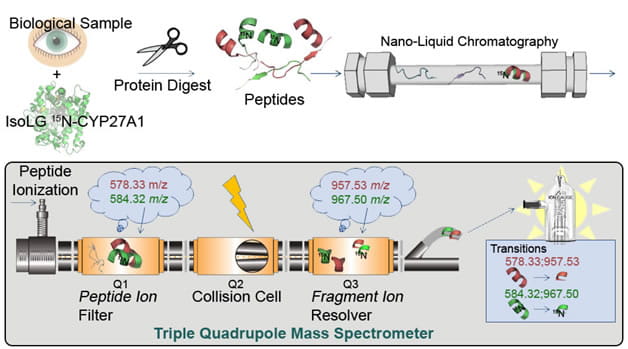 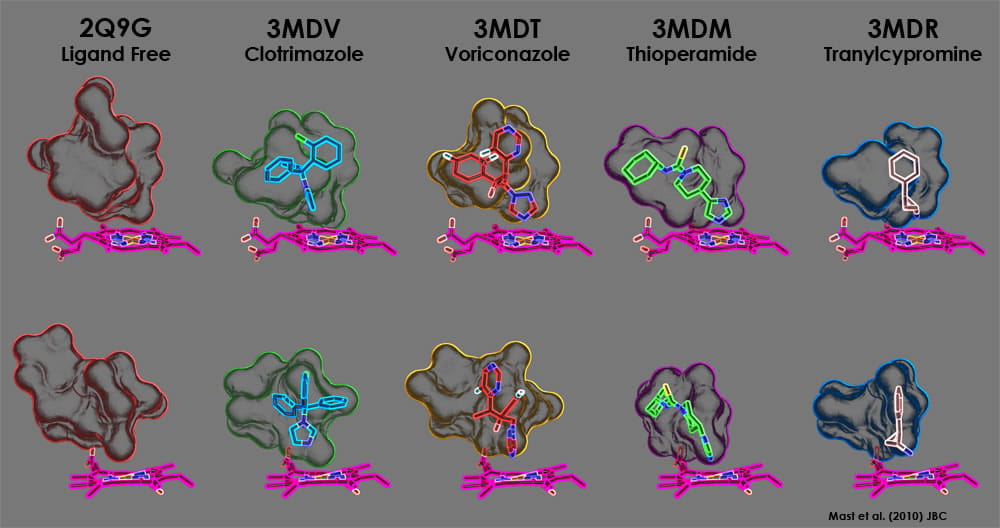 Plasticity of the CYP46A1 Active Site as Revealed by X-Ray Crystallography. Almost every amino acid residue in the active site of CYP46A1 can readjust its position to better fit the inhibitor molecule, thus explaining the unusual ability of this cholesterol-metabolizing P450 to bind pharmaceuticals of different size and shape. 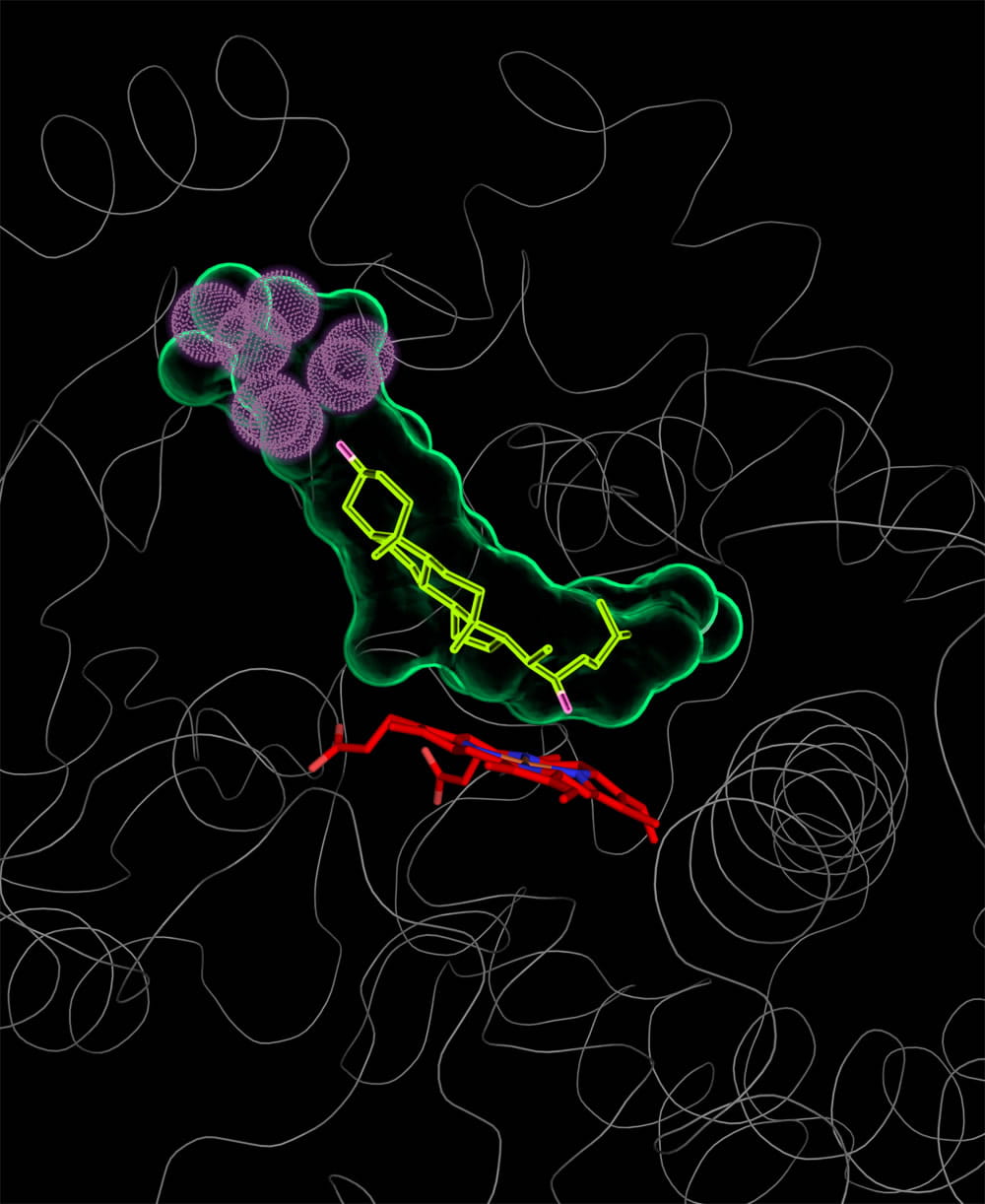 Structural Basis For Three-step Sequential Catalysis by the Cytochrome P450 11A1 that Catalyzes the Conversion of Cholesterol to Pregnenolone. The network of structural water molecules (in violet) at the entrance to the CYP11A1 active site (contoured in green) allows the "soft" recognition of the hydroxyl group of the first reaction intermediate, 22R-hydroxycholesterol (in yellow) and enables sterol shuttling between the active site entrance and the heme group (in red), the site of catalysis. The protein backbone is represented as a gray ribbon.
Back to Top