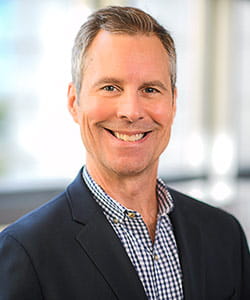 Jeffery A. Dusek, PhD, is the Director of Research at University Hospitals Connor Whole Health and an Associate Professor in the Department of Family Medicine and Community Health at Case Western Reserve University.

He received his PhD in BioPsychology from Stony Brook University in New York in 1996 and completed post-doctoral training at Boston University in Cognitive Neuroscience in 1997.

Dr. Dusek has over 20 years of experience leading innovative integrative health and medicine research at prominent research and healthcare institutions in the US.

From 1998 to 2007, Dr. Dusek was the director of research for the Mind/Body Medical Institute at the Beth Israel Deaconess Medical Center and Instructor in Medicine of the Harvard Medical School.

From 2007 to 2017, Dr. Dusek was the Director of Research at the Penny George Institute of Health and Healing, Allina Health based in Minneapolis, Minnesota. He was the Principal Investigator of a multi-year R01 grant from the NIH which studied the effect of integrative therapies on pain in hospitalized patients. His grant has resulted in 13 manuscripts published in peer reviewed medical research journals thus far.

Dr. Dusek has also been a leader of the BraveNet Practice Based Research Network – a cohesive group of 17 well-known integrative health and medicine clinics across the United States. One of BraveNet’s most ambitious projects to-date is the 5,000+ longitudinal Patient Receiving Integrative Medicine Interventions Effectiveness Registry (PRIMIER) for which Dusek is the Principal Investigator. UH Connor Whole Health is the newest member of BraveNet joining in 2019 and will participate in upcoming BraveNet projects!

Dr. Dusek’s research has been published in eminent journals such as the Journal of the National Cancer Institute, Circulation and the Proceedings of the National Academy of Science. His research been featured in such venues as the New York Times, Washington Post, Boston Globe, USA Today, and National Public Radio.

Request an appointment with an Integrative Medicine specialist at University Hospitals.
Call: 216-285-4070