Blood Circulation in the Fetus and Newborn

How does the fetal circulatory system work?

During pregnancy, the unborn baby (fetus) depends on its mother for nourishment and oxygen. Since the fetus doesn’t breathe air, their blood circulates differently than it does after birth:

While still in the uterus, the baby's lungs aren't being used. The baby’s liver isn't fully developed. Circulating blood bypasses the lungs and liver by flowing in different pathways and through special openings called shunts.

Blood flow in the unborn baby follows this pathway: 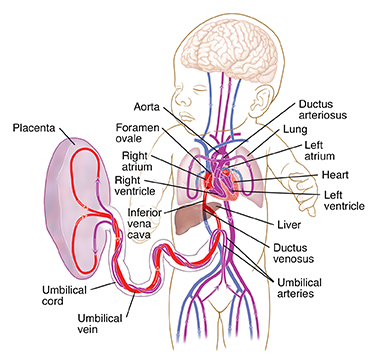 Here is what happens inside the fetal heart:

At birth, major changes take place. The umbilical cord is clamped and the baby no longer receives oxygen and nutrients from the mother. With the first breaths of air, the lungs start to expand and the ductus arteriosus and the foramen ovale both close. The baby's circulation and blood flow through the heart now function like an adult's.

Call or email our dedicated LGBTQ+ and Gender Care manager to schedule a consultation.

Watch our virtual seminar which discusses how University Hospitals has integrated multiple service lines to serve and support the LGBTQIA+ population.

Watch Now
Back to Top