Artwork Provides Comforting and Uplifting Environment for Patients and Families

For everyone who spends time at University Hospitals Seidman Cancer Center – patients, visitors, caregivers and employees – the 325-piece art collection is designed to uplift, comfort and calm; to provoke thought and curiosity; to encourage reflection; to delight in the moment and to provide confidence and hope. 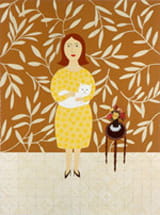 Lucy Fradkin is a self-taught artist whose passion for art and art-making has informed and influenced her for as long as she can remember. Raised in New York City, she remembers numerous visits to the Brooklyn Museum with her mother. She was drawn to the graphic and design styles of the 1940’s and 50’s, from which she drew her early aesthetic sensibilities, influences that remain present in her work to date. In 1991, she spent several months traveling in Mexico and Guatemala studying indigenous art and hand-painted signage, which inspired new directions and ideas. She has also traveled extensively throughout Italy and Greece and has a strong affinity for the ancient frescoes and mosaics. For the past 8 years she has concentrated on a series of figurative works painted in oil or gouache on paper. She sometimes incorporates collaged decorative elements from a variety of sources including old catalogs, field guides and vintage books into her work. Her use of color and patterns tells stories of daily life where the viewer is drawn into an intimate world. Her personal history is evident in the quiet presentation of issues of gender and race.

Julia Barello’s primary medium is discarded medical imaging film. She cuts the film into various shapes and patterns, loosely guided by the subtle colors within the film – hints of human body parts. Barello says that “Once cutting and organizing occurs, whispers are left of those individuals.” These abstract cuttings are then dyed and thoughtfully arranged to reveal larger, recognizable forms, such as birds, flowers or leaves. The film-shapes cast bold shadows that become essential to the overall viewing experience.
Barello is a Professor of Art at New Mexico State University, where she teaches jewelry and metalsmithing. She has exhibited extensively throughout the U.S. and abroad. 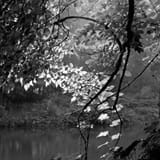 Gary Engle has been photographing since the 1980’s. Engle produces black and white photographs in the traditional darkroom process, hand printing each to archival standards using fiber paper and finishing prints with selenium toning. His tranquil images of Cleveland parks highlight some of the exquisite gems of our city.
In the early 1990’s, he served as a Founding Board Member of the Cleveland Museum of Art’s Friends of Photography where he met Ray Metzger, a nationally recognized landscape photographer who became his inspiration. He has been photographing with large format cameras since 1997. In 2007 he was recognized by the Ohio Arts Council for Individual Excellence in Photography. 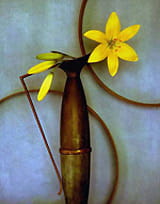 Masatomo Kuriya uses the ancient art of Japanese flower arranging in his still life photographs. His work is striking in its color and balance. He uses Cibachrome as his photographic medium along with his beautiful hand-painted backdrops. This blending of technology and tradition make Kuriya’s work unlike any other floral still life. Each image is saturated with color and his attention to detail and minimalism is striking and expressive; calming and sensitive.
Born in Japan, Kuriya was a successful commercial photographer in Tokyo when he decided to move to the United States and pursue a career in fine art photography. His work has been exhibited in major galleries and museums throughout the world.

Bukovnik’s work maintains a contemporary edge while recognizing the historical traditions of rendering flowers in their realistic form. Rather than placing his compositions in front of busy backgrounds, Bukovnik allows the flowers to breathe by surrounding them with the simplicity of solid backgrounds, inviting the viewer to focus on the delicate beauty of individual blossoms and lush leaves.
He is considered one of the great flower painters of the 20th century and is collected widely. Bukovnik’s watercolors and monotype prints are the subject of a book by Harry N. Abrams, New York, published in 1990, which prominently illustrates 60 color reproductions by the artist, a forward written by the curator of the Hunt Institute of Botanical Documentation, and an essay about the artist and the depiction of flowers in art.
Bukovink was born in Cleveland and studied at the Cleveland Institute of Art. He has lived in San Francisco for twenty-five years.

What do you get when you put a camera in the hands of a skilled pilot and accomplished, Harvard-educated architect? The answer is a lesson in multi-task flying and photographs from a unique perspective, both visually and conceptually. Alex MacLean became interested in aerial scenery while studying community planning in 1975, and earned his flight permit that same year. Since then, he has portrayed the history and evolution of the landscape from vast agricultural patterns to city grids, recording changes brought about by human intervention and natural processes.
Aesthetically, MacLeans’s images are dramatic studies in aerial geometry, pattern, and atmosphere. But for MacLean, context is as important as form. He hopes that viewers’ appreciation for the imagery will inspire further consideration of the altered landscapes portrayed, and the impact of man on the land – a non-renewable resource. 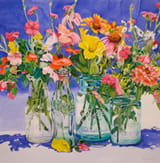 David Barba showcases his mastery of watercolor in Three Cans and Flowers. Watercolor is a notoriously unforgiving medium. Unlike oil painting, in which the pigments can remain wet and malleable for days and therefore can be reworked, marks made with watercolors are permanent. Barba pushes the medium to its limits by working in a photo-realistic style, requiring an especially keen eye, steady hand, and precise application. 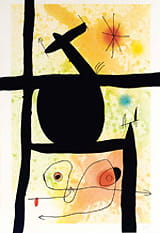 La Calebasse (The Gourd) Etching and aquatint with carborundum (1969)

Joan Miró was a Catalan/Spanish painter, sculptor and ceramist born in Barcelona, Spain. His father was a watchmaker and his mother a goldsmith, Miró was exposed to the arts from a very young age. Although often considered part a Surrealist among artists such as Salvador Dalí, Rene Magritte and Man Ray, Miró never became an official member of that group in order to be free to experiment with other artistic styles and trends such as Fauvism, which focused on pure, brilliant colors, Cubism, and other influences from folkloric Catalan art to Roman frescos.

This print represents Miró’s final artistic period beginning in the 1960’s. Here he concentrated his interest on the symbol, not giving too much importance to the representing theme, but to the way the symbol emerged as the piece of work.