When many people travel by air, their ears may not pop as the altitude changes. This is 1 of the most common health complaints of airplane passengers. It is caused by an air pocket in the middle ear that is sensitive to changes in air pressure. The changing altitude as the plane takes off or lands can cause mild pain in the ears.

Swallowing or yawning often can help "pop" the ears. This activates the muscle that opens the eustachian tube. This tube connects the middle ear with the back of the nose. Ears that are already blocked (by a cold, for example) can't equalize the air pressure in the middle ear enough. This creates a vacuum that sucks the eardrum in and stretches it. When the eardrum can't vibrate, sound is muffled. And the stretched eardrum can be very painful. If you have nasal congestion from allergies, a cold, or are prone to painful ears on airplane descent, then taking an over-the-counter decongestant or antihistamine may help equalize the pressure in the ear. Talk to your healthcare provider about which of these medicines are safe for you. 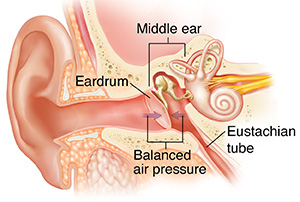 If swallowing or yawning does not ease the ears, try this ear-clearing method:

If you hear a pop, your ears are unblocked. You may need to repeat this process a few times, especially during the plane's descent before landing. After landing, if your ears don't open and are still painful, see a healthcare provider who specializes in ear problems.

Small children are more likely to have blocked ear canals. That's because their eustachian tubes are narrower. Using a bottle or pacifier during take-off and landing may help pop their ears. Try to keep small children awake during a descent so they will swallow more often.

Earwax is naturally made by the outer part of the ear canal to keep the ear clean. It does this by trapping dust and sand particles before they reach the eardrum. It entraps and kills bacteria, fungus, and viruses. Wax also coats the fragile skin of the ear canal and acts as a water repellent. Wax buildup often moves its way to the ear opening, dries up, and falls out.

How should I correctly clean my ears?

Normally, ears canals are self-cleaning. They should not need cleaning with any devices or cotton-tipped swabs. Cleaning the ear can cause problems by pushing the earwax deeper into the ear canal and against the eardrum. Sometimes, too much wax can build up or can get pushed inwards. This will cause a blocked ear canal. In the case of a blocked ear canal, see your healthcare provider. They may be able to do 1 or more of the following:

Ear candles are not recommended. They have not been shown to work well and can cause severe burns and burst (ruptured) eardrums.

Always see your healthcare provider for a diagnosis and for more information.