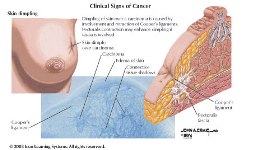 What are the symptoms of breast cancer?

Breast cancer often causes no symptoms in its early stages, when it's very small and has not spread. Women with early breast cancer usually don’t have pain or notice any breast changes caused by the cancer. This is why routine screening tests such as mammograms are important. They are often able to detect the disease in its early stages before symptoms occur.

As breast cancer grows, it can cause symptoms such as:

When to see your healthcare provider