COVID-19 Update: UH has visitor restrictions in place to protect patients and staff against coronavirus. Permitted visitors will be screened for flu-like symptoms. Click here for additional information on non-essential appointments, testing locations, COVID-19 information and how you can help during this crisis. 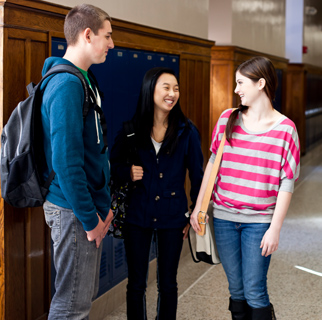 How much will my teen grow?

The teenage years are also called adolescence. This is a time for growth spurts and puberty changes (sexual maturation). A teen may grow several inches in several months, followed by a time of very slow growth. Then they may have another growth spurt. Puberty changes may happen slowly. Or several changes may occur at the same time.

It's important to remember that these changes will happen differently for each teen. Some teens may have these signs of maturity sooner or later than others. Each child goes through puberty at their own pace.

What changes will happen during puberty?

Sexual and other physical maturation that happens during puberty is due to hormonal changes. Here's a look at the changes for boys and girls.

In boys, it's hard to know exactly when puberty is coming. There are changes that occur, but they happen slowly and over a period of time. It's not just a single event. Each male teen is different and may go through these changes differently. But these are average ages when puberty changes may happen:

Girls also experience puberty as a series of events. But their puberty changes often begin before boys of the same age. Each girl is different and may go through these changes differently. These are average ages when puberty changes may happen:

Both boys and girls go through certain stages of development when developing secondary sex characteristics. These are the physical characteristics of males and females that are not involved in reproduction. These include voice changes, body shape, pubic hair distribution, and facial hair. Here's a quick look at the changes that happen:

What does my teen understand?

The teenage years bring many changes. These are not only physical, but also mental and social changes. During these years, teens become more able to think abstractly. Over time they can make plans and set long-term goals. Each child may progress at a different rate and may have a different view of the world. In general, these are some of the abilities you may see in your teen:

As your teen starts to struggle for independence and control, many changes may happen. Here are some of the issues that may affect your teen during these years:

How to help your teen to develop socially

Here are some ways to help strengthen your teen's social abilities:

Based on your individual needs, you may be offered an in-person, online or telephone appointment. Call 1-844-791-6047 today to make an appointment and find out which option will work best for you.