Your immune system is made up of a large network of cells, tissues, and organs. They work together to fight off infections and other harmful substances.

But the immune system doesn’t always work the way it should. 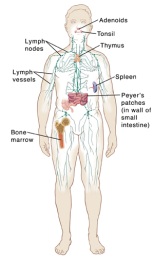 Genes are the building blocks of human growth and development. They control many features, such as hair and eye color. Genes also affect the way the immune system works or how it responds to threats. Primary immunodeficiency disorders are present at birth. They are often inherited. This means they are linked to genes passed from one generation to another. Some immune disorders are diagnosed at or shortly after birth. Other immune disorders may not have symptoms. Or they may be diagnosed until later in childhood or adulthood.

Researchers keep learning how genes affect immune disorders. For example, one genetic defect may block certain cells defending the body. Another defect might stop the removal of toxic chemicals from the body.

Some symptoms of immune disorders

Symptoms of an immune disorder include:

Complications of primary immune deficiency and genetic immune disorders include:

To diagnose genetic immune disorders, your healthcare providers should do the following: