Squamous cell carcinoma of the head and neck (HNSCC) is a major problem and is often associated with poor survival and morbidity rates. Early diagnosis plays a key role in disease progression, treatment response, and ultimately, quality of life and patient survival. Elucidation of the molecular mechanisms leading to head and neck cancer may result in the identification of new biomarkers, such as expression of specific genes or proteins, which would be of diagnostic and prognostic value, and may aid in the clinical management of these patients. The discovery of these biomarkers can also be useful for identification of preneoplastic lesions, which are difficult to distinguish from other lesions. Such knowledge will be of great value in the prevention and prognosis of HNSCC.

One clear problem with solid tumor tissue is that a clinically-obtained tissue sample often contains significant numbers of surrounding normal, dysplastic, stromal and quite likely, inflammatory cells. This confounds attempts at generating condition-specific expression results. Laser capture microdissection (LCM) provides a means to improve precision in obtaining only the desired tissue or cell type. The LCM apparatus separates a single slide-mounted tissue sections into user-selected groups of cells which can then be analyzed independently. 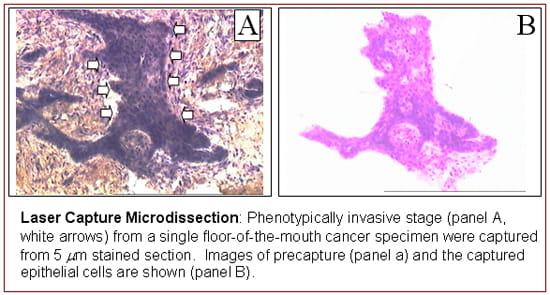