Digestive health specialists at University Hospitals use the most innovative diagnostics and treatment methods for patients with Barrett’s esophagus.

Barrett’s Esophagus is a serious disease that can progress to cancer if not carefully diagnosed, monitored and treated. Call 216-844-8500 to schedule an evaluation with an esophageal disease expert today.

Typically, a complication of long-term heartburn or gastroesophageal reflux disease (GERD), Barrett’s esophagus is identified when the lining of the lower esophagus changes to a mixture of gastric and intestinal cells. Our upper GI specialists offer a multispecialty team approach from initial diagnosis through treatment and ongoing monitoring to keep patients well and improve quality of life.

Our team at University Hospitals uses the full spectrum of diagnostics and monitoring capabilities for patients with signs of Barrett’s esophagus including: 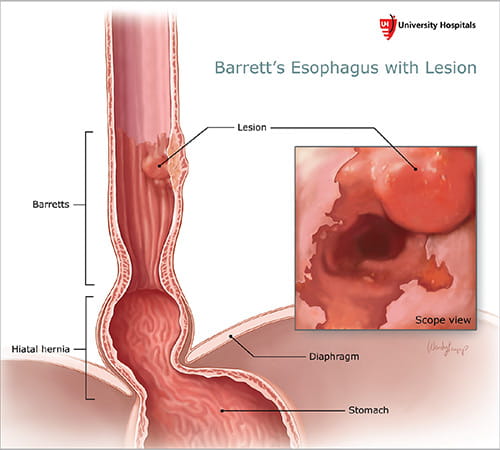 Our board-certified specialists use the most advanced Barrett’s esophagus treatments to care for our patients . With an individual treatment plan, we determine the optimal care for each patient, based on individual needs. Treatment methods may include:

Many patients suffer in silence. That’s because Barrett’s esophagus symptoms can be minimal, but the damage from long-term acid reflux can be very serious. Sometimes other diseases mimic acid reflux, making the diagnosis and treatment more complex. Our highly-skilled specialists make sure each patient with Barrett’s esophagus has a thorough diagnosis and individualized treatment plan.

Even after treatment, patients require lifestyle changes including a Barrett’s esophagus diet and life-long monitoring for any changes. Our team carefully monitors your condition for any issues or additional tissue damage.

For More Information about Specialized Care for Barrett’s Esophagus

If you have concerns or questions about your digestive health, contact one of our team members at a location close to you.

Barrett’s Esophagus is a serious disease that can progress to cancer if not carefully diagnosed, monitored and treated. Call 216-844-8500 to schedule an evaluation with an esophageal disease expert

Find a Doctor
Back to Top