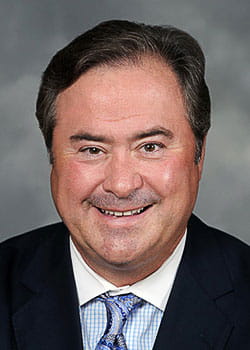 Ralph Della Ratta is Co-Head of M&A Advisory and Managing Director of Citizens M&A Advisory. Previously, Ralph was founder, CEO and managing partner of Western Reserve Partners, a Cleveland-based middle market investment bank that provided mergers and acquisitions, capital raising and other financial advisory services. In May 2017, Western Reserve Partners was sold to Citizens Financial Group. He has more than 40 years of experience in investment banking and commercial banking. Prior to founding Western Reserve Partners, Ralph managed the Investment Banking Division of KeyCorp and McDonald Investments Inc. Prior to joining McDonald Investments, he was employed at American Fletcher Corporation (now JPMorgan Chase) for ten years, most recently serving as division manager in the corporate group.

Ralph served on the board of directors of numerous private and public companies and currently serves on the Board of SunCoke Energy, Inc. He is a past board member of Olympic Steel Inc., TCP, Inc., Hyland Software and NDI Medical. In addition, Ralph has been actively involved in various charities and not-for-profit organizations. He is also a member of the 50 Club of Cleveland. He previously held volunteer leadership positions with the Rock and Roll Hall of Fame, the Ohio Venture Capital Authority (Chair)(appointed by Governor Ted Strickland), the Board of Trustees of Kent State University (Chair)(appointed by Governor John Kasich), the City Club of Cleveland (President), Business Volunteers Unlimited, the Annual Fund of Duke University, the Duke Alumni Association, the Cleveland Center for Contemporary Art, the United Cerebral Palsy Telethon (Chair), the INROADS of Northeast Ohio (Chair), the Achievement Centers for Children (Chair) and the Capital Improvements Board of the City of Indianapolis (Treasurer).

Ralph earned a Bachelor of Arts from Duke University, a Master of Business Administration from Thunderbird School of Global Management and a graduate degree in banking from the Stonier Graduate School at Rutgers University.