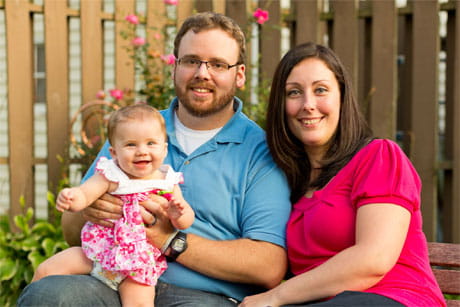 Nicole and Brian Hardman of Avon Lake, Ohio, knew early that they wanted to start a family. Longtime childhood friends, the couple started dating in college and had been married five years when they celebrated the birth of their first child, Lucas Patrick Hardman.

“He had the most amazing blue eyes, and we instantly fell completely in love,” said Nicole, speaking of baby Lucas. “Everything seemed perfect.”

But the Hardmans soon learned that their son had a rare genetic skin disease called epidermolysis bullosa (EB), a group of rare connective skin tissue disorders that affects 1 out of every 20,000 live births in the U.S. EB causes the skin to blister and tear with even the slightest friction, and in severe cases can cause internal blisters in the nose, mouth, esophagus, stomach and lungs. Children with this disease are often called “butterfly children” because their skin is so fragile. Doctors told the Hardmans their son had the rarest and most severe form of EB, and gave him a life expectancy of less than two years.

Then, when Lucas was five weeks old, he was rushed to the hospital after he began having trouble breathing. The Hardmans were told that the blisters forming in his lungs were causing them to shut down. Doctors allowed the Hardmans to take Lucas home, and he died later that day in his mother’s arms.

A few months after Lucas passed away, doctors did genetic testing on Lucas’s blood samples that had been collected, as well as on both of the Hardmans.

Genetic testing at University Hospitals’ Department of Human Genetics confirmed that Lucas had two EB-causing genes, and that Nicole and Brian each carried one of these genes. This meant that any future children they conceived would have a 25 percent chance of having the most severe and fatal form of EB, just like baby Lucas.

Saddened by the reality of the genetic test results, the Hardmans believed they could not have any more biological children.

“While 25 percent may seem like a small number, it was too much of a risk for us. We could not let another baby suffer the way our little Lucas did,” said Nicole. “So we had resigned ourselves to the fact that we could not have any more biological children of our own. It was a very hopeless feeling.”

About one year after the death of baby Lucas, Nicole Hardman underwent an implantation procedure using embryos that had tested negative for EB using pre-implantation genetic diagnosis. Then on March 9, 2013, the Hardmans celebrated the birth of their daughter Callie Rose, a healthy newborn.

“Callie can do so many things that her big brother never had the chance to do,” Nicole said. “She can wear regular clothes without worrying about the seams hurting her skin. She can wiggle and play as much as she wants without giving herself blisters. And most importantly, I can cuddle her and kiss her as much as I want, and it doesn’t hurt her.”

Nicole and Brian Hardman are so grateful to University Hospitals for giving new hope to families. “I hope that each and every one of you knows that your donations to families like mine are creating miracles every day,” said Nicole. “We will never, ever forget how lucky we are to have our Callie Rose.