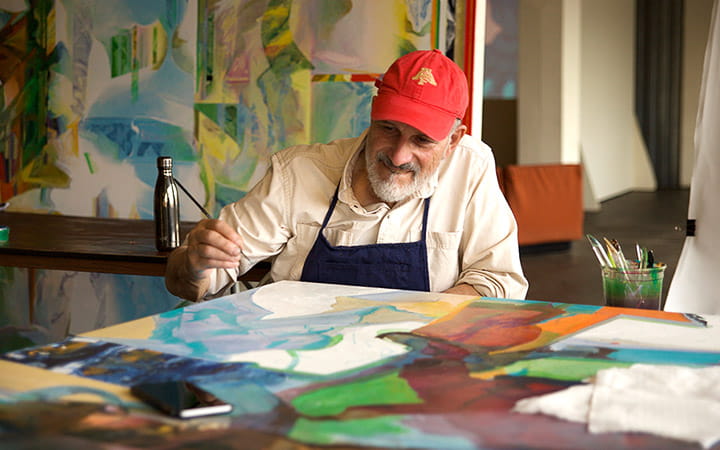 Painter Mark Krieger’s cancer journey has been inspired by the example of a father who fought through daily struggles as a double amputee and by 32 years teaching art to middle-school children.

With paintbrush in hand and an eye toward the future, this liposarcoma survivor is determined to make every day count and to use the experience of his illness to try to help others who face cancer. The experts at University Hospitals Seidman Cancer Center have influenced his perspective as he paints the next canvases of his life. And he has important lessons yet to share.

“It may hurt, and you may not always have the energy, but, as my son told me early in my recovery: ’You have to push yourself,’” says Mark, 77, who watched his own father, disabled by diabetes and using a wheelchair, gardening and washing dishes with one sinewy arm. His father died while he was still in high school, but Mark carries the lessons of his perseverance throughout his life – and summoned them when he was working his way through an unexpected cancer diagnosis.

“Reaching out to others is so important. You don’t feel so alone.”

Mark has spent a lifetime building trusting and memorable relationships, as an art teacher at University School and an artist traveling to draw portraits of migrant children in Central America. So he naturally relied on his relationship with his UH internist when several concerning symptoms arose. First, he experienced gastrointestinal upset, with sharp abdominal pain and nausea. A consistently conscientious eater then on a low-carb diet, he was losing more weight than he believes he should have. He was gripped by fatigue. During a pandemic spring of video chats with friends and family, they began commenting that he did not look well. Finally, after a telehealth video session, his doctor wanted a closer look and noticed a visibly firm area under Mark’s rib cage.

Urologic oncologist Adam Calaway, MD, diagnosed a mass on Mark’s kidney that measured 14 centimeters, about the size of a cantaloupe. But it wasn’t kidney cancer. Mark actually had liposarcoma, a rare soft tissue cancer that had burrowed into the wall of muscle just below the liver and touched multiple adjacent organs.

Dr. Calaway collaborated with surgical oncologist John Ammori, MD, on an extensive surgery to remove Mark’s kidney, adrenal gland, gallbladder and part of his colon. Given the size and location of the tumor, Mark recovered extremely well from this complex surgery, says Dr. Ammori.

“He is currently cancer-free, but he will require follow-up with scans since there is a chance that the cancer can recur,” Dr. Ammori says. “Mark did very well, considering the size and location of the tumor,” says Dr. Ammori. “Now we will follow him with scans, which is very important with this type of cancer.”

Dr. Calaway added: “Mark had a wonderful outcome because we were cognizant of his imaging and the extensive nature of his liposarcoma – and because, at UH, our specialists work hand in hand for the best outcomes.”

Dr. Calaway urged Mark to move, as best he could, every single day. During his recovery at UH Seidman Cancer Center, no visitors were allowed due to pandemic restrictions. Mark’s partner had participated in his phone conferences with doctors, and when he finally came back home, thin and fragile, she requested leave from work to nurse him. Together, they began the long road back. “I was lucky to have her,” he says.

In the weeks after surgery, painful abdominal stiffness that felt like his gut was filled with concrete finally abated. In the hospital, it took Mark several minutes to rise from his bed to walk a few paces with his intravenous (IV) pole trailing behind him. Once home, he traded the IV pole for his walking stick from Yellowstone National Park, and forced himself to walk down his driveway. He added steps every day. As the weeks went by, he gained strength and more weight, relying on guidance from UH clinical dietitians who could advise which foods he could digest and which he should avoid.

“Start small with activity, if you have to,” Mark says. “Ten months after surgery, I am mostly recovered, but the efforts of those tough early weeks were crucial. Whatever you can do, do it. And keep reaching out to people so you don’t feel alone. Sharing with other people helps me feel better.”

In addition to friends, Mark surrounds himself with the art that has been his life’s work. Since retirement, he has delved more into abstract painting and the scores of charcoal portraits of the children he met in Honduras and at the US/Mexico border.

Mark has a lot of painting and drawing left to do. He still worries about cancer, but when he does, he thinks of his father, pushing through despite his formidable physical challenges, and counts himself lucky.

“I wish I had known my dad longer,” Mark says. “I’d love to tell him what an inspiration he was. His courage has colored my life.” 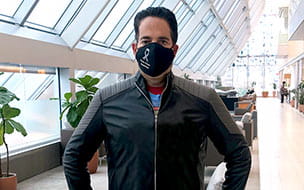 Three college graduations. Three family weddings. The births of two grandchildren. Andy “Superman” Simon has cherished each of these milestones... 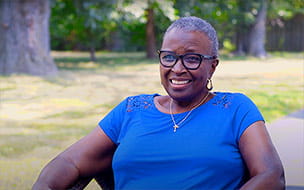 A Long Journey with Immeasurable Rewards

In 1990, Renee Bonner began treatment for breast cancer following a routine exam. She has been in cancer treatment ever since. Watch her inspiring...