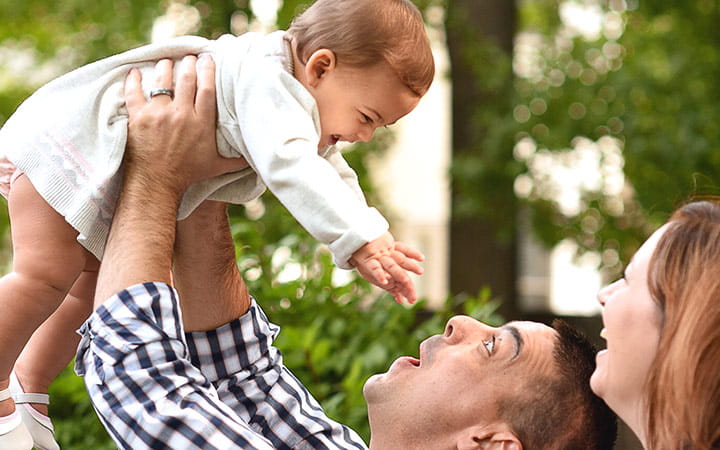 A baby in a Pearl Jam onesie and a message from her father, a brain cancer survivor, struck a chord with Eddie Vedder and his band.

The 2017 inductees into the Rock & Roll Hall of Fame dedicated “Hard to Imagine” to Bill Castrovince during a 2016 concert in Tampa, Florida after receiving a Facebook message from the Rocky River family: “Hi, Mr. Pearl Jam! My dad says your music helped him beat brain cancer, so he could have me. Thank you!”

Castrovince’s zest for life and the inspired and personalized care of University Hospitals Seidman Cancer Center have propelled him to a stunning recovery. “For him to have this kind of tumor and not to suffer a deficit is amazing,” says his neuro-oncologist Lisa Rogers, DO. “His life is so full. He’s doing very well.”

A TV anchor and reporter who makes a living communicating, Bill became worried when he couldn’t find the words. He was 39 when the first warning signs appeared with trouble connecting thoughts. One morning, he opened his mouth but could not summon any speech.

He was headed for a Pearl Jam concert in Toronto when he realized he’d better go instead to the ER. He went to the emergency room at University Hospitals Twinsburg Health Center and was transferred downtown to University Hospitals Cleveland Medical Center, where doctors discovered a glioblastoma wrapped around the speech center in his brain’s left temporal lobe.

“I couldn’t connect my thoughts, and I couldn’t talk,” Castrovince recalls.

Neurosurgeon Andrew Sloan, MD, gave Castrovince the sobering news that he had a malignant brain tumor called a glioblastoma multiforme (GBM) near his delicate speech area, with only a 50/50 chance of surviving 15 months. Dr. Sloan explained that operating with “language mapping,” which requires the patient to be awake during the surgery, would maximize the chance for a complete surgical resection without causing any harm to his language function and improve his odds with complete removal of the GBM.

Castrovince opted to undergo surgery, and Dr. Sloan mapped his language area while removing the tumor. Just before closing, Dr. Sloan performed an intraoperative MRI of the brain using high-resolution imaging in the special OR at UH Seidman Cancer Center that he helped to design. The MRI showed that the tumor had been completely removed.

After surgery, Castrovince’s motor function was good and his speech slowly improved. In the subsequent treatment phase of radiation and chemotherapy, his bone marrow could not tolerate extensive chemotherapy. However, he has no sign of cancer recurrence and no neurological deficits, according to Dr. Rogers, who sees him in the office every two to three months.

Castrovince married his wife, Carolyn, at the Old Stone Church the summer after his surgery. Carolyn was by his side on that fateful day when he received his diagnosis at UH and has remained steadfast in her support throughout his treatment.

He continues to work as editor of High School Sports Insider, a TV program that features athletes across Northeast Ohio. Castrovince puts in three long days per week. He practices daily to process speech.

In December 2015, he and his wife welcomed their daughter, Olivia Marie.

“I always wanted to be a dad, but I thought it might be too much to ask to be alive and be a father,” says Castrovince, who recently marked five years since diagnosis. “To be so low, and now to be at the highest I could ever imagine, it’s amazing.” 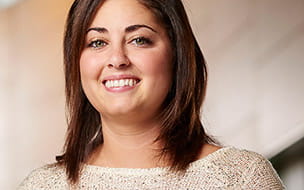 Gina Cortese was a 20-year-old college student when she first felt a numbness in her left toe. When her leg gave out during class one day, she knew... 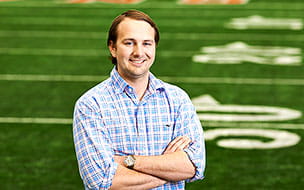 Chagrin Falls native Sam Tippit was preparing for the opportunity of a lifetime: he was heading to Montana to join a minor league baseball team....