Legacy of Philanthropy and Support

University Hospitals has had a renowned cancer program throughout its history. Since the 1940s when it was part of Cleveland Cancer Consortium, UH has contributed major clinical and scientific cancer treatment advancements.

In 1981, the UH cancer program received substantial support from the State of Ohio through Robert Livingston Ireland, Jr.’s (Feb. 1, 1895-April 21, 1981) efforts, a prominent Cleveland business executive who had a long and distinguished career with the M.A. Hanna Company and the Pittsburgh Consolidation Coal Company. He was a member of University Hospitals Board of Directors for more than 40 years and Chairman of the Finance Committee.

In 1987, the National Cancer Institute (NCI) named UH Ireland Cancer Center the first clinical cancer center in Northern Ohio. The center’s partnership with Case Western Reserve University attracted recognition and funding for innovative research. From its beginning, UH Ireland Cancer Center has strived to provide the highest standards of care for cancer patients, to make new discoveries about treating the disease through clinical research and to reach out to the community through educational efforts and information on the effectiveness of early screening. As a result of the outstanding work of its faculty and staff, UH Ireland Cancer Center attained the National Cancer Institute’s highest designation as a Comprehensive Cancer Care Center in 1998 - it retains that distinction today. Through the years, UH cancer services grew to seven sites on UH Cleveland Medical Center campus. 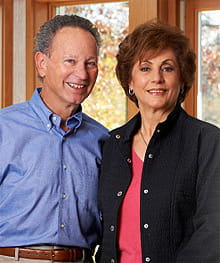 The cancer center is named after Jane and Lee Seidman who generously donated $42 million in support of Vision 2010:The UH Difference.

The cancer program embarked on a new era of patient care with the opening of UH Seidman Cancer Center in 2011. This 120-bed hospital consolidated all UH Ireland Cancer Center's services under one roof. The center is named in honor of Jane and Lee Seidman who generously donated $42 million in support of Vision 2010: The UH Difference strategic initiative. UH has always thrived because of the community’s generosity. Through philanthropic leadership and continued support, we move forward strengthening our fight against cancer and honoring the individuals who have helped us build that foundation.

Schedule your appointment with a specialist at University Hospitals.

Schedule Your Appointment Today
Back to Top