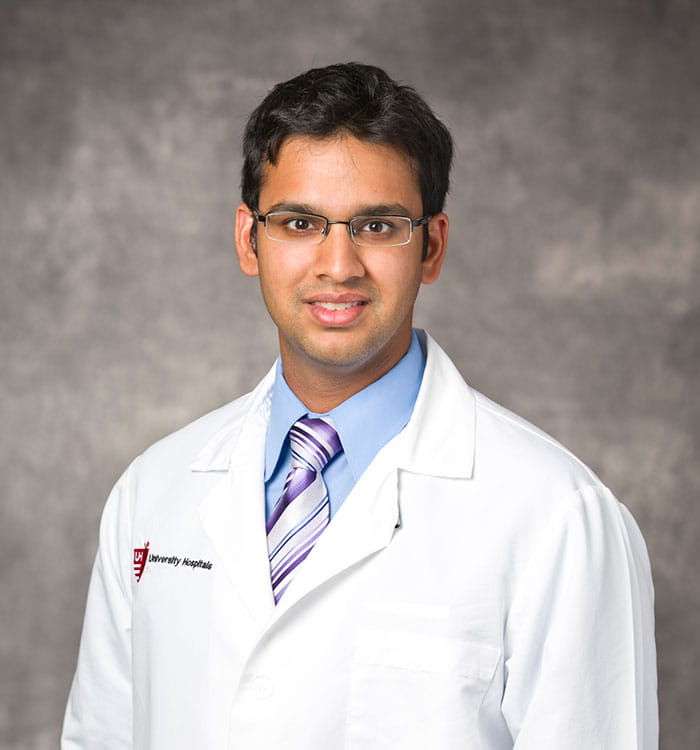 For many parents, the telltale symptoms of ear tugging, fussing and fever are all too familiar. That’s because ear infections are one of the most prevalent ailments among young children and the most common cause of trips to the pediatrician. Kiara Herbert knew these symptoms all too well. Her daughter, Rodmicka, battled ongoing ear problems from the time she was born.

“Rodmicka had her first hearing screening in the hospital at just 2 days old. She failed the test, which started us on a journey to find a solution,” Kiara says.

Kiara learned that Rodmicka’s ears were filled with fluid. The problem caused the infant to develop ongoing ear infections and hearing problems. After months of no improvement, Kiara sought the help of specialists at UH Rainbow Babies & Children’s Hospital.

The middle ear – where most ear infections occur – is connected to the upper respiratory system by the Eustachian tube. This small tube helps keep the ear ventilated and dry. However, if the Eustachian tube doesn’t work well or gets blocked or swollen, warm fluid can build up in the ear and become infected. This is especially common during an illness such as cold or flu.

Ear infections are common among young children because oftentimes their Eustachian tubes are not developed enough to stay open and ventilate the ear. As children grow, the problem can correct itself. But proper treatment of ear infections is important.

“Typically, ear infections are treated with oral antibiotics. But we want to avoid overuse of antibiotics in children so they don’t develop a resistance to the drug,” Dr. Shah says. “For children with recurrent ear infections, the placement of ear tubes is often the best treatment.”

Dina Cirino, CNP, a member of the pediatric ear, nose & throat department of UH Rainbow Babies & Children’s Hospital, conducted thorough evaluations of Rodmicka’s ears. She found that both of Rodmicka’s middle ears were narrow and unable to drain, causing a buildup of fluid that continually became infected. Cirino referred Rodmicka to Dr. Shah for ear tubes.

“The placement of ear tubes is a low-risk procedure and one of the most common surgeries in children,” Dr. Shah says. “About 500,000 are performed every year.”

Although Kiara was nervous about the procedure, she decided that moving forward with ear tubes was the right decision. At 7 months old, Rodmicka underwent the 20-minute procedure with Dr. Shah.

“I watched Rodmicka suffer through countless ear infections and knew it was the best treatment for her,” recalls Kiara.

Rodmicka’s surgery went well. And for about eight months she was infection-free. But when Rodmicka began having ear infections again, doctors learned that her ear tubes were too small to handle the extra sticky fluid that clogged them.

Dr. Shah conducted two more procedures before the ear tubes successfully solved Rodmicka’s problems. “Rodmicka’s case was unusual,” says Dr. Shah. “Most children need only one set of tubes. But we didn’t stop until her problems were fully resolved.”

Today, Rodmicka is a happy, active 3-year-old. Although she has slight speech delays because of her early fluid buildup, she’s catching up quickly. Rodmicka loves blocks, coloring and playing hide-and-go-seek with her two older sisters.

“As a single mom, I want to make the best decisions for my kids,” Kiara says. “I am so happy we went to UH Rainbow Babies & Children’s Hospital; we loved our team of doctors. They truly cared about the health of my daughter and that means a lot.”