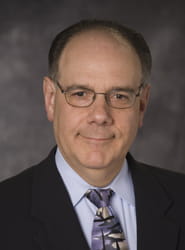 Dr. Scher attended the University of Rochester (1968-1972) graduating with honors in History and Biology. After attending the SUNY of New York at Downstate Medical School (1972-1976), he completed a 2-year residency in pediatrics at New York Hospital-Cornell Medical Center (1976-78), and subsequently completed a 3-year pediatric neurology fellowship at the University of Minnesota, where he concurrently completed a fellowship in clinical neurophysiology (1978-1981). He then completed a post residency research fellowship in neonatal EEG/ neonatal neurology and experimental epilepsy at Stanford University (1981-1983).

His first of two academic appointments was at the University of Pittsburgh where he established and directed the fetal/neonatal neurology service at Magee-Women's Hospital, while participating in service and teaching in the Division of Pediatric Neurology at Children's Hospital of Pittsburgh. He held joint faculty appointments in Pediatrics, Neurology and Psychiatry from 1983-1997 achieving the rank of tenured associate professor of Neurology and Pediatrics.

Since 1997, he has held the position of Chief of Pediatric Neurology at Rainbow Babies and Children's Hospital until July 2017, and is a tenured professor of Pediatrics and Neurology at the Case Medical Center at the Case Western Reserve University. Over his 20-year tenure as Chief, he established the fetal/neonatal neurology service, the pediatric epilepsy and pediatric sleep programs at Rainbow, expanding the division from 2 faculty in 1997 to a 10th faculty recruitment.

Dr. Scher's research focuses on subjects in fetal and neonatal neurology health and disease, applied to both diagnosis and outcome in neonatal neurointensive care as well as throughout childhood. Utilizing visual and digital analyses of EEG-Sleep, he applied this functional biomarker to the study of brain maturation and organization, comparing preterm and full term survivors. His overarching research objective has been to study developmental neuroplasticity through interdisciplinary research studies with investigators in pediatric nursing, pediatric neurology, neonatology, developmental pharmacology, engineering, epidemiology and pathology. He has participated in 13 NIH-supported studies, of which 6 he was principal investigator or co-investigator, culminating at present in 164 peer-reviewed publications and 44 book chapters.