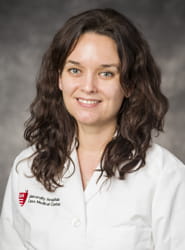 Camilla Kilbane, MD, is a neurologist at University Hospitals Cleveland Medical Center and Assistant Professor of Neurology at Case Western Reserve University School of Medicine. She also directs the fellowship program in movement disorders in the Parkinson's & Movement Disorders Center, is the medical director of the Deep Brain Stimulation program and the interim Movement disorder center director.

Dr. Kilbane completed her medical degree at the Royal College of Surgeons in Dublin, Ireland, after receiving a national Norwegian scholarship to study abroad. She completed an internship at Beaumont Hospital in Dublin, Ireland, prior to moving to the U.S. She did a U.S. internship at Queens Hospital Center in Queens, N.Y. Dr. Kilbane completed her residency in neurology at Mount Sinai Medical Center in New York City, serving as chief resident, and completed two years of fellowship training in movement disorders at University of California San Francisco under Professor of Neurology, Dr Jill Ostrem, and received intra-operative physiology training by Professor of Neurosurgery, Dr Phill Starr.

Dr. Kilbane participates in clinical trials of investigational drugs and devices to treat Parkinson's disease and other movement disorders. She is the author or co-author of over 15 publications in peer-reviewed medical journals. In addition, she has presented abstracts at many international and national peer-reviewed medical conferences. Dr. Kilbane is a member of the American Academy of Neurology, the Movement Disorder Society as well as the Parkinson's disease Study Group.