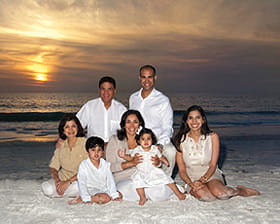 “Cleveland has given me my life. I can think of no better investment than University Hospitals’ Vision 2010.”
- Monte Ahuja.

Monte Ahuja came to the U.S. in 1969 from India to attend graduate school at Ohio State University. There he earned his MS in mechanical engineering in 1970. He came to Cleveland and earned his MBA at Cleveland State University while he worked various jobs and struggled to make ends meet. As part of his coursework at CSU, he developed the business plan for Transtar, which started to turn a profit after the first year in 1975. Today, Transtar is the leading worldwide distributor of quality transmission parts to the motor vehicle repair industry. The company has annual revenues of more than $250 million.

While in graduate school, Monte and Usha met. Usha was a gold medalist for mathematics in India and came to the U.S. to complete her PhD in mathematics. For over 20 years, Usha Ahuja taught math at the college level while also being a vital business partner and confidant to Monte. Today, their only grandson, Rohan, is the joy of their lives.

The Ahujas were inspired to support Vision 2010 because they understand the powerful impact it will have on health care delivery in the region and beyond. As a UH director, Monte Ahuja is intimately aware of the vital role Vision 2010 will serve as health care needs change and expand over the course of the next several decades. And, as a member of the UH Development Committee, Usha Ahuja regularly participates in discussions with leadership about details of Vision 2010 plans.

Make an appointment with a medical professional at UH Ahuja Medical Center.