Therapy for Multiple Myeloma Has New Approach With One-Time Treatment Patients being treated for multiple myeloma have a promising new option for treatment.

The treatment, called ABECMA, was recently approved by the U.S. Food and Drug Administration (FDA). The therapy is used when the standard treatment for multiple myeloma – a combination of chemotherapy, radiation therapy and/or stem cell transplant – is no longer effective.

ABECMA targets B-cell maturation antigen (BCMA), a molecule that is almost exclusively expressed on myeloma cells and B cells, to mount a powerful, lethal attack against cancer cells.

“I commonly encounter scenarios where patients are in critical need for a drug with a new mechanism of action to control the rampant disease,” says Dr. Malek, who specializes in multiple myeloma.

“Now, with approval of ABECMA, as the first-in-class CAR T-cell that targets BCMA, we are able to deliver a single-infusion and effective personalized therapy to achieve long remissions,” he says.

This new therapy is a shift from classic anti-myeloma therapies, which typically rely on continuous and long-term therapy to treat a chronic cancer such as multiple myeloma.

It will be welcome news to patients, Dr. Malek says.

“The main benefit of ABECMA is that it is a one-shot, one-time therapy,” Dr. Malek says. “Usually patients with multiple myeloma are on continuous therapy for a long time, with side effects and impact on their lifestyle.

“But with this new CAR T-cell therapy, we have the opportunity to have a one-time treatment and then watch the patient without any need for chemotherapy. This is particularly important in terms of quality of life. Without chemotherapy, patients can enjoy remission.”

Dr. Malek says the science that led to the approval of ABECMA is robust. The clinical trial evaluating the therapy enrolled heavily treated multiple myeloma patients who had already had the main class of chemotherapy agents used for the cancer.

Results showed that patients receiving ABECMA achieved significant disease control, with a response rate of close to 73 percent. The median follow-up period for patients on the therapy was just over two years. At least half of patients achieved almost nine months or longer of remission of their disease with no continuous therapy afterward.

“This is a very remarkable response and quite a long remission time,” Dr. Malek says. “When patients exhaust all these three main classes of drug, they don't have many options really to enjoy long remissions. CAR T-cell therapy gives them this opportunity, as shown in this important clinical trial.  With ABECMA approval, it could be just the beginning for stronger CAR Ts to be available for patients with multiple myeloma in the near future.”

UH Seidman Cancer Center is the first in Ohio to offer the recently approved CAR T-cell therapy to treat multiple myeloma. Learn more about this and other cancer services at UH Seidman Cancer. 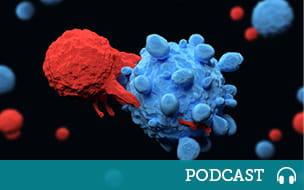 Immunotherapy is a new, groundbreaking approach to treating cancer that harnesses the body’s own natural defenses to fight tumors.