Spiking Blood Pressure Signals Pregnancy-Related Crisis Before and After Delivery 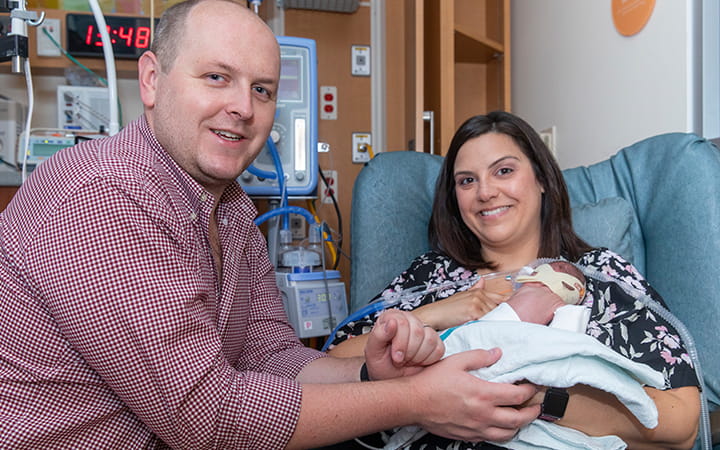 Little Lenny, born at 27 weeks, snuggles against his mother’s chest in the neonatal intensive care unit at UH Rainbow Babies & Children’s Hospital. Weighing a mere 1 pound 11 ounces at birth, this tiny boy is an enormous miracle to his parents, who are still struck by the dramatic cascade of events that brought them safely to this place.

He clings to his mother, Natassia Safranek of Cleveland, who is alive herself because she recognized the signs of a post-partum emergency and returned to University Hospitals, a recognized leader in addressing pregnancy-related complications and providing timely treatment.

“My husband & I cannot speak any more highly of the staff at UH altogether – and for each and every individual who came in contact with us who literally saved my life and my son's life,” Natassia says.

Natassia delivered Lenny three months early by cesarean section at UH MacDonald Women’s Hospital. Her pregnancy had been going smoothly, except for an unusual dry cough that developed around Memorial Day. By Independence Day, while celebrating at fireworks with family and friends, she realized her usually active baby had stilled in her womb, leaving her worried.

A sharp pain under her right breast was this pregnant woman’s telltale sign of preeclampsia, a serious complication of pregnancy characterized by high blood pressure. Alarmed, she texted a friend and new mother about her symptoms, and the response chilled her: CALL YOUR DOCTOR RIGHT NOW. THIS IS PREECLAMPSIA.

Natassia quickly got in to see the OB/GYNs at South Suburban Women’s Center. The ultrasound showed the baby rotating in her womb, but Natassia could not feel the movement. Doctors scheduled her for a follow-up diagnostic ultrasound with OB imaging at UH Cleveland Medical Center and told her she absolutely must make this appointment.

“I saw on the screen that he was moving, but I couldn’t feel him,” Natassia recalls.

In the few hours before heading downtown, Natassia began violently vomiting and was wracked by intense pain across her belly. Her blood pressure was skyrocketing. At UH MacDonald, she was whisked off for testing, which found elevated liver enzymes and plummeting platelets. She was given magnesium sulfate intravenously to lower her blood pressure to avoid seizures that could lead to strokes. Natassia was told she would not go home pregnant. Her baby was soon to be born.

“They were very fast-acting and very informative at UH MacDonald,” Natassia says. “The labor and delivery nurses and doctors were fantastic. I felt like I was on a cloud.”

Leonard Edwin, the namesake of his great-grandfathers, was born Friday, July 9 at 2:57 p.m. Natassia and Lenny’s father Ricky could not see him for the first 24 hours.

Further testing found that Natassia suffered from HELPP syndrome, a rare but serious complication often related to preeclampsia. This caused her blood pressure to spike, leading to palpitations in her heart and throat, and she felt awful. Natassia was stabilized before she went home, but nurses gave her a digital blood pressure machine to monitor herself.

Cleveland EMS offered to take her to UH Parma Medical Center or MetroHealth, the two closest hospitals to their South Hills home. Natassia insisted on being taken to UH Parma, since it was affiliated with UH. Within seconds upon her arrival, nurses Nyah and Britt and medics Sam and Adam were bustling around the room, hooking up IVs and an EKG to check her blood pressure.

“EMS brought me to UH Parma, where they didn’t skip a beat,” Natassia says. “The staff at UH Parma were truly amazing and extremely compassionate.”

Mike Kelley, MD, swiftly facilitated Natassia’s transfer to UH MacDonald Women’s Hospital, where she had delivered her baby. She found it enormously comforting that he had arranged this, based on her vitals and all available information, as soon as he spoke with her.

“Post-partum preeclampsia is a serious condition,” Dr. Kelley says, adding that even women who did not experience preeclampsia before delivery can develop this problem. “UH Parma is a community hospital with many specialties, but we also know when our patients need a higher level of care.”

Natassia’s second stay at UH MacDonald only lasted two days. She felt comforted knowing her treatment was delivered in the same location as her son, just a hallway away from her in UH Rainbow’s neonatal intensive care unit. She’s greatly recovered now and focusing on her baby. And she can’t thank UH enough for saving both of them.

“My husband and I are forever grateful to every single person at UH Parma and main campus who have been a part of this wild journey that we are only just beginning,” Natassia wrote in a letter of thanks to her caregivers. “I thank you all for saving my life and I am overcome with emotion knowing that it was a very scary possibility that I could very well not be here today along with my son.” 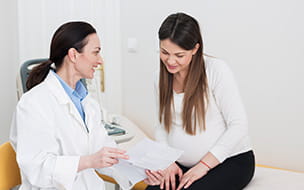 A better understanding of preeclampsia, how it is treated, and whether you are at risk can help you safeguard the health of you and your baby.... 6 Surprising Things That Can Affect Your Pregnancy

Pregnant or planning to get pregnant? Abby Myers, APRN-CNM, certified nurse-midwife with University Hospitals, offers these recommendations on six...