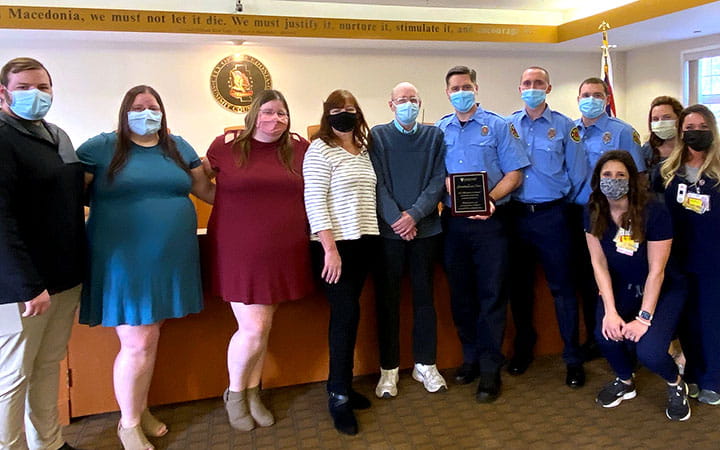 Steve and his family (from left: Brett, Dana, Lisa and Valerie) with the Macedonia EMS squad and members of the UH Ahuja Stroke Thrombectomy Team that saved his life.

In early February, Stephen “Steve” Blackwell was sick for about a week with what he thought was a stomach flu. On Friday morning, February 12, he felt a lot better when he woke up and decided to go into his office in Macedonia.

“While on a phone call with a coworker, Steve started to slur his speech,” says his wife, Valerie Blackwell. “When his coworker went to check on him, he found Steve slumped in his chair. He was found immediately as the stroke was happening. Thankfully, his coworker recognized the symptoms and called 9-1-1 right away.”

Valerie has been a medical lab technician for 45 years, and while getting ready for work that day received five texts from Steve that she couldn’t quite decipher and a call from his manager. The manager told her they believed Steve was having a stroke and they were having EMS take him in for treatment. She immediately called Steve’s primary care physician and rushed to meet them at UH Ahuja Medical Center.

As the neurologic exam suggested a major artery blockage, additional brain scans were performed and the UH Ahuja Stroke Thrombectomy Team was activated so that Yin Hu, MD, Chief of Neurological Surgery at UH Ahuja, could travel to meet the patient quickly. A stroke of this kind is caused by a blockage in an artery in the brain, and a thrombectomy is the mechanical removal of the clot by a highly trained neurosurgeon.

To start the thrombectomy, Dr. Hu’s team made a puncture at the groin through the femoral artery, and navigated on the X-ray all the way up to the neck with a series of tubes. Then, they took a smaller wire, called a microcatheter, all the way to the clot. Next, they brought a larger catheter to the clot, turned the pump on to engage it, and were able to suction the clot out effectively.

Valerie was told that patients need to remain awake for this type of procedure and said that Steve could hear when the clot was removed. His stroke symptoms almost completely resolved right there on the operating table.

“As we neurosurgeons emphasize, time is brain,’” Dr. Hu says. “Ensuring that a patient does not have a stroke is a very time sensitive issue. We watched Steve literally improve on the table. Without the thrombectomy, Steve would have damaged the entire right hemisphere and would have been completely paralyzed on the left side. We were able to avoid a major stroke."

Having the ability to perform stroke intervention thrombectomy procedures at UH Ahuja is an extremely important asset to the east side community, and supports the east side emergency medical service squads in saving precious minutes to access life-saving stroke treatment.

“EMS picked Steve up at 2:05 p.m. and he was out of surgery by 4:40 p.m.,” Valerie says. “Being in the health care world, I know that this kind of turnaround time is absolutely phenomenal.”

The UH Neurological Institute deploys stroke interventionalist physicians out to the community hospitals for time-sensitive procedures, rather than transferring patients downtown to UH Cleveland Medical Center.

“Every 30 minutes that stroke intervention care is delayed results in a 10 percent less chance for functional recovery for patients,” Dr. Hu says. “If patients take too long to arrive, they may no longer be candidates for a mechanical thrombectomy.”

Dr. Hu says the team at UH Ahuja was extremely skilled and organized, and had all equipment prepared before emergency medical services arrived with Steve. Once Steve arrived to surgery, Dr. Hu and his team were able to perform the entire procedure quickly in just 19 minutes.

Steve and Valerie’s twin daughters, Dana and Lisa Blackwell, are also in the medical field. They work at UH Cleveland Medical Center as medical-surgical nurses. Lisa and Dana work 7 a.m. to 7 p.m. shifts and the family often arrives home late at night. Valerie believes that Steve going into work that day truly saved his life.

“Sometimes ignorance is bliss,” Valerie says. “As a family immersed in the medical field, we were thinking of everything that could possibly go wrong. We know the expression time is brain and realize how important it was that Steve went to work that day and had coworkers and medical teams who knew how to take quick action in the situation. Otherwise, we wouldn’t have been home to help him, and he may not be with us today.”

Steve took walks around the neighborhood to build up his stamina following surgery. He was back to work within two months and is still feeling healthy on his road to recovery. 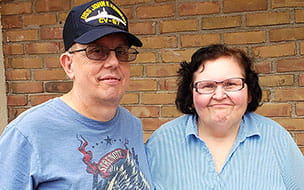 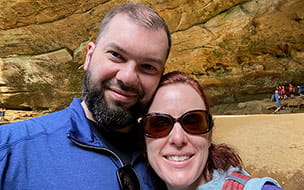