How You Can Fight Inflammation By Making the Right Food Choices The famed pediatrician and best-selling author Benjamin Spock rocked the culture of the 1960s with his famous advice to new mothers: “Trust yourself. You know more than you think you do.”

With a twist, that advice also applies to today’s adults when it comes affecting their own health: “Trust yourself. You can do more than you think you can.” That applies to becoming healthier, preventing or reversing seemingly chronic conditions and reducing pain.

That principle is at the heart of integrative medicine, and it infuses how Keary O’Connor, DO, a physician with the UH Connor Integrative Health Network, guides patients in taking control of their own well-being. Integrative medicine emphasizes the relationship between the clinician and patient and focuses on the whole person to achieve optimal health and healing.

“My goal has always been to find a better way for the patient,” Dr. O’Connor says. “I know that patients can have a locus of control over their lives, and outcomes.”

A Diet to Reduce Inflammation

A big part of that is by beginning to follow a lifestyle that decreases inflammation in the body – which is a process behind nearly every illness common in the 21st century, whether it’s diabetes, heart disease, chronic obstructive pulmonary disease (COPD), rheumatoid arthritis, osteoarthritis, or chronic pain, just to name a few.

She has seen in her patients the dramatic effects that decreasing inflammation can have, even in a relatively short amount of time, and that change starts with nutrition. The foods that are known to have inflammatory effects on the body are staples of the Western diet: dairy products, meat, sugar and flour.

Foods that fight inflammation are vegetables, fruits, whole grains and plant-based proteins. What Dr. O’Connor provides is information, a kind of nutritional therapy, in which patients might be surprised to learn that, for example, fried vegetables, granola and yogurt are not health foods, and can be high sources of fat, sugar and calories.

But Dr. O’Connor also understands that it’s not always easy for a patient to change many years of habits, especially when it comes to eating. Favorite foods also are a source of comfort in times of stress, as nearly all of us know.

That’s why she encourages patients to start with one thing – a step-by-step approach, perhaps one that starts first with adding fiber to their diet, which can increase satiety and lower cholesterol. A week later, another change can be incorporated, perhaps cutting down the number of times you eat meat each week.

“I tell them they will feel better, and their mood will be better, and they start to see it for themselves,” she says. “It’s the simplest things, but patients are often receptive. As a physician you have to meet them where they are and find out what is making them tick.”

Gradually, the patient will move toward more plant-based choices: perhaps putting oat milk in coffee or cereal; substituting beans for meat in a few meals each week; eating whole fruits instead of juice, trying different kinds of vegetables, eating unprocessed oats for breakfast with fruit instead of sugary instant cereals of any kind. And preparing your own food, instead of buying prepared foods or restaurant fare, which is loaded with fat, sugar and salt.

Dr. O’Connor, who grew up in South Central, Mich., is well aware of the traditional Midwestern diet.

“It was chicken, beef, pork or turkey, eggs for breakfast, cheese with everything,” she says, recalling childhood meals. And of course, white bread, rolls, cookies and other forms of refined carbohydrates.

But it’s not just the Midwest. She has lived and practiced family medicine in cities across the country, and knows that every region has its favorite go-to foods – and in the unlikely event they are vegetables, they probably include lots of butter or are laced with some other kind of fat. She herself over the years switched to a plant-based diet and even as a busy doctor, she prepares most of what she eats from scratch – cooking it in batches and freezing it for meals during the week.

She recently moved here from Westwego, La., which is not far from New Orleans, and there, many of her patients lived in the bayous, where they enjoyed rich or fried foods. They weren’t all that open to changing their eating habits, at first telling her there was no way they’d give up meat.

But they were willing to start by eating more rice and beans, which also are a hallmark of Southern fare.

“I had a 75–year-old gentleman who came in and I spent an hour with him and his daughter,” she says, offering some healthy habits he could start incorporating.

“He came back in six weeks, having lost 25 lbs., and within two more months, had lost more than 50 lbs. His A1C – which measures blood glucose - went to 5, which is ideal,” she says. “The results are real.”

And when patients see the results – and just as important, notice how much better they feel physically, and realize they are lowering the risks for such conditions as a heart attack or stroke – a new momentum toward eating healthfully gets underway. 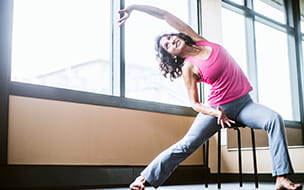 How Chair Yoga Can Expand Your Practice

Until you've spent some time doing chair yoga, you have no idea how satisfying it can be -- not to mention how quickly it reduces stress and helps...