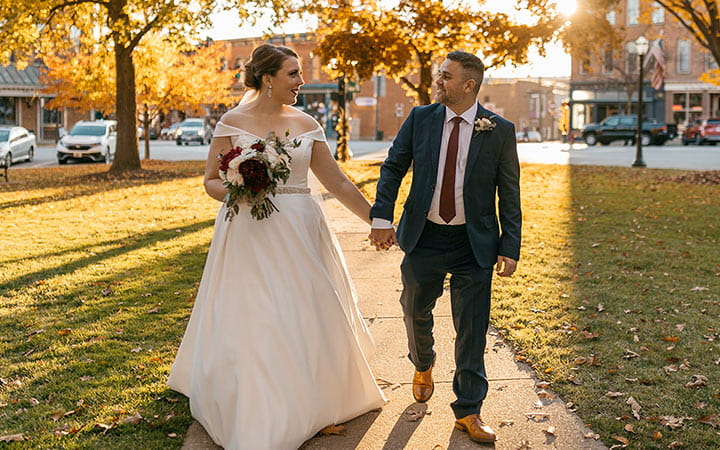 Ailene and Adam on their wedding day.

Ailene met with dietitian Dina Corrao, who put her on a 1,500-calorie per day diet and urged her to ramp up her exercise. She lost 40 pounds before she underwent surgery in September 2019 – and she’s lost 100 pounds more since. The pre-surgery routines have been critical in ensuring long-term life changes.

“Ailene has been a true example of success,” says Anna Hazinakis, BS, RN, CBN, the clinical coordinator and assistant nurse manager of the Nutritional Health & Bariatric Surgery Center at UH Parma. Ms. Hazinakis has been recognized as a Distinguished Bariatric Nurse by the American Society for Bariatric and Metabolic Surgery, which accredits the program. “Ailene committed from day one to this journey and has been an inspiration to many around her.”

Finally Taking Care of Herself

Ailene, a clinical nurse partner in a physician practice, spends her days caring for the needs of patients. After suffering the loss of baby niece who was born with a genetic disease, Ailene was depressed and turned to comfort food and a full work schedule for solace. She gained 50 pounds in six months and realized her weight was getting out of control. She weighed 360 pounds when she came to her first appointment at the bariatric center.

“I needed permanent tools that would hold me accountable,” says Ailene, whose previous weight loss efforts had failed. “I want to live a really, really long life, and enjoy my life. I knew something had to give.”

Three months after recovering from surgery, Ailene was engaged to her boyfriend of three years. Shopping for her wedding dress, after slimming down from a size 26 to a 16, was fun. Going out to dinner was more enjoyable when she didn’t have to worry about squeezing into a cozy booth. “Those little things have been huge,” she says.

Her family, including a new niece whose spring 2019 birth prompted that first appointment at UH Parma, has motivated her along the way to keep going. Ailene is intent on watching Grace grow up and being an active aunt who can run and play. She also wants to put herself in the best position to avoid the heart disease that forced her grandparents to undergo surgery.

Anna believes Ailene has balanced this phase of her new life well with the tools provided by the bariatric center.

“All sides of this triangle are equally important in long-term success,” Dr. Abbas says. “We are proud of her success. Her self-discipline and personal effort – along with surgery, diet compliance and exercise – all go hand-in-hand in with her success story.”

UH’s team of weight-loss doctors and surgeons, medical weight-loss specialists, nutrition experts, and other clinical support staff provide a wide range of solutions – and help you find the right one for your personal weight-loss goals. With ongoing education, support and follow-up care, we can guide you on your journey toward a healthier life. Learn more about weight-loss management services at University Hospitals. Weight-Loss Surgery May Have Benefits Beyond the Scale

Two recent studies show there appears to be benefits to weight-loss surgery that underscore the long-term value of dropping excess pounds. Before Courtney Pound’s bariatric sleeve surgery, her primary care physician was very concerned about her health, due to a number of medical...