There is a very important connection between diabetes and heart disease that is under-appreciated by most people with diabetes: If you are living with diabetes, then you are at heightened risk for heart and kidney disease.

Often this is because many patients with diabetes also have one or more conditions such as high blood pressure that contribute to this higher risk for developing heart disease. In fact, 68 percent of people age 65 or older with diabetes die from some form of heart disease, with, increasingly, complications from kidney disease.

And while people with diabetes generally take care of their condition by following a glucose-lowering treatment plan, they may not consider doing the same for heart and kidney health by following preventive heart health and kidney-friendly strategies.

There are three groups of people in the United States who are at risk for heart disease related to diabetes. They are people diagnosed with diabetes (about 72 million), people who have undiagnosed diabetes (8 million) and those who have pre-diabetes (91 million).

"We know that diabetes increases the risk of heart and kidney disease multifold, yet 80 percent of American adults with diabetes are either uncontrolled, untreated or unaware of their condition," says Ian J. Neeland, MD, director of cardiovascular prevention and co-director of the Center for Integrated and Novel Approaches in Vascular-Metabolic Disease (CINEMA) at UH Harrington Heart & Vascular Institute. "This is a major public health problem."

How Risk for Heart, Kidney and Eye Disease is Estimated

When you have diabetes, the likelihood of getting kidney disease, eye disease or heart disease can be calculated based on your A1C levels. Doctors order A1C blood tests to check your diabetes, diagnose diabetes or check how well you're controlling your diabetes through medication.

The risk for getting heart, kidney or eye disease is calibrated according to your control of diabetes, Dr. Neeland says.

"So it's very important not only to know that you have diabetes, but to get it addressed and get it under control to reduce the risk of getting these diseases," Dr. Neeland says.

"What's important to know is that heart disease if the No. 1 cause of death in all patients with diabetes in the world -- much more than stroke, chronic obstructive pulmonary disease or lower respiratory infections," he says.

"One of the problems of diabetes is the fragmentation of care," Dr. Neeland says. "Traditionally, diabetes and heart disease can be very confusing for patients.

"Patients go from specialist to specialist or from clinic to clinic receiving mixed messages and different instructions and it's really been a fragmented type of care," he says.

Because diabetes involved so many different organs and systems of the body, patients need a multi-disciplinary team consisting of a doctor, nurse, certified diabetes educator and pharmacist, as well as other people who can put the patient at the center of the team's focus, Dr. Neeland says.

"They need to take a holistic approach and consider such questions as what kinds of food do you eat or have access to, how is thefamily support network. Also an abundant amount of resources are needed to support, advise, guide and help the patient so they are not left alone to try to fend for themselves, but have a support and care team with them every step of the way."

Dr. Neeland says the good news is that in 2020 and beyond, the future is bright for people with diabetes.

"We have many new avenues of treatment and care for diabetes," he says.

One of the most exciting is that there are two new classes of medication to treat diabetes: SGLT2 inhibitors and GLP-1 receptor agonist medicines.

"In the past few years, we have seen these two classes of medications do something that no other diabetes medication has done before, and that's reduce your risk of heart disease," Dr. Neeland says. "Insulin and all the other medications that you get for diabetes actually do not change your srisk for heart disease. They help lower your blood sugar but they're much less effective for preventing heart disease."

Dr. Neeland say these two medicines can do many different things:

Any patient with or at risk for heart disease needs to be considered for these new meds, Dr. Neeland says.

"These new medications are a completely different ballgame -- even if sugar is controlled and your eyes are fine. Heart disease is lurking in the background," he says.

It's important to see a cardiologist who understands diabetes, as well as heart disease, and can integrate care and treatment, Dr. Neeland says. 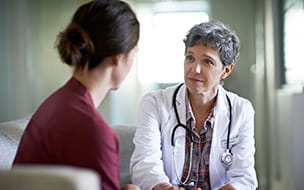