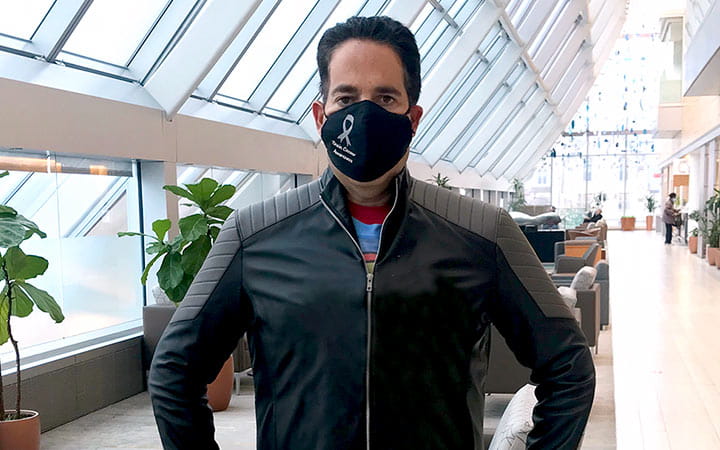 Andy “Superman” Simon has cherished each of these milestones since he was diagnosed five years ago with a glioblastoma multiforme (GBM grade 4), one of the deadliest and most challenging cancers to treat. GBM patients typically survive an average of 12 to 15 months. Only 6.8 percent of GBM patients survive five years, according to the National Brain Tumor Society.

But the Superman of UH Seidman Cancer Center – who memorably donned a full costume for his final treatment in September 2016 and is free of cancer today with no recurrence – is anything but typical.

“I feel incredible,” says Andy, now 56. “I flew through treatment with ease, because I had the best team and the best surgeon. The way I see it, I had cancer, I don’t have it.”

The crushing headache, similar to a migraine yet inexplicably and mysteriously different, struck early one morning in November 2015. Pulling out of his driveway to head to the ER, Andy was equidistant from two different hospital systems. He and his wife believe that fateful turn to come to UH Ahuja Medical Center, and then UH Seidman Cancer Center, has made all the difference.

“If we hadn’t gone to UH, I honestly believe in my heart that Andy wouldn’t be here today,” says Amy, Andy’s wife.

Neurosurgeon Andrew Sloan, MD, Director of UH’s Brain Tumor & Neuro-Oncology Center and the UH Seidman Center for Translational Neuro-Oncology, diagnosed the large mass in Andy’s brain as a GBM. He performed a craniotomy on Andy using 5-Aminolevulinic Acid (5-ALA), an experimental agent that improves the surgeon’s ability to identify the tumor. Dr. Sloan’s own surgical trial assessing this agent was one of only a handful of studies in the United States at the time, though it is now approved for use throughout the US by the FDA. Andy took the 5-ALA prior to surgery, which causes the cancer cells to glow hot pink, for more complete removal of these aggressive, invasive tumors.

Radiation and chemotherapy are the standard of care following a craniotomy for GBM. Andy also took advantage of a novel phase 1 clinical trial that used his own blood and genetically re-engineered it in the lab to resist steadily higher doses of toxic chemotherapy through six rounds.

A new clinical trial, funded by a $2.3 million grant from the National Cancer Institute and based on the gene therapy Andy participated in, will open at UH Seidman Cancer Center in the next few months.

“Andy has been a champion,” Dr. Sloan says of the poster-boy for this trial, noting that five-year GBM survivors commonly experience recurrence. “Andy is a very ambitious and spirited guy. He’s a real fighter.

“This treatment is really a game-changer. This could be the new standard of care. It’s really exciting and very promising.”

Besides a groundbreaking clinical trial and her husband’s indomitable spirit, Amy Simon believes the compassion and inspiration of UH Seidman Cancer Center’s caregivers showed them that a GBM doesn’t have to mean the death sentence she initially feared. She cried when told the original diagnosis, and hasn’t since shed a tear about this cancer.

“I had this sense of relief, confidence and trust in the team,” Amy says. “You’re not just a number at UH, you’re somebody. I know they care about Andy, but they cared about me, too, as a person.

“I always tell people to come here. If I can help one person get a different avenue on this journey, it’s worth it.”

For the last several years, Andy has celebrated his craniversary with a big party complete with a photo display of his milestones. He was planning a blowout celebration this year until the pandemic struck. Till next year, says Papa Andy, who is now intent on introducing a new generation to a world of purpose and wonder.

“There is hope,” says Andy. “I have too many things to fight for, and to live for. I’ve gotten too far. I’m going to be a statistic for the other side. Every day is a milestone, really.” 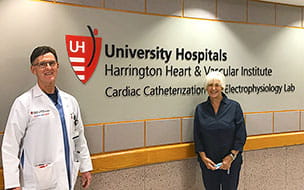 Grateful for the care she received, a woman recalls the frightening event that almost took her life.