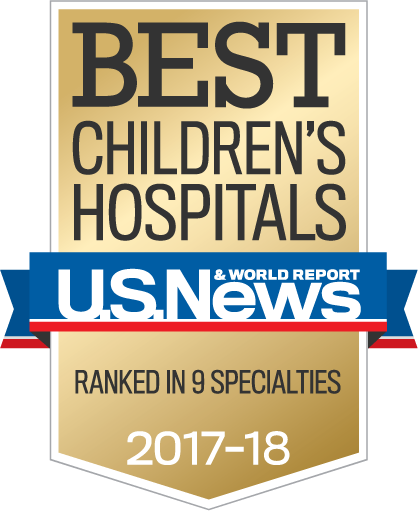 “We are honored U.S. News & World Report has recognized the outstanding work of our physicians, nurses and staff," says Fred Rothstein, MD, Interim Chair, Department of Pediatrics at UH Rainbow. “We have exceptional people who are passionate about caring for babies, children and young adults, and producing the very best outcomes for the patients and their families who come to us for their care.”

UH Rainbow has long been regarded as an international leader in the treatment of critically ill and extremely low birth-weight babies since pioneering neonatology in the 1960s, culminating in opening one of the nation’s first family-centered NICUs with space for parents to stay with their baby, UH Rainbow’s Quentin & Elisabeth Alexander Neonatal Intensive Care Unit (NICU).

At UH Rainbow, neonatal specialists collaborate closely with maternal fetal medicine specialists, creating the safest and most comprehensive care for pregnant women and their babies – all under one roof, so mothers and their babies are never separated.

The U.S. News Best Children’s Hospitals rankings rely on clinical data and on an annual survey of pediatric specialists. The rankings methodology considers clinical outcomes, such as mortality and infection rates, efficiency and coordination of care delivery and compliance with “best practices.”

Survival rates, adequacy of nurse staffing, procedure and patient volume, availability of programs for particular illnesses and conditions and much more can be viewed on http://health.usnews.com/best-hospitals/pediatric-rankings.

This year’s rankings will be published in the U.S. News & World Report’s “Best Hospitals 2018” guidebook and available on newsstands September 12. Visit Best Children’s Hospitals for the complete rankings and use #BestHospitals on Facebook and Twitter.

Schedule your appointment with a specialist at University Hospitals.

Schedule Your Appointment Today
Back to Top